Keywords:
action, color, compromise, culture, injustice, oneness, race, racial, racial unity, racism, racist, reconciliation, resist, segregated, segregation, social justice
In August of 1963, Martin Luther King, Jr. delivered his famous "I Have a Dream" speech, calling on all Americans to view others not by the color of their skin but by the content of their character. Yet King included another powerful word, one that is often overlooked. Warning against the "tranquilizing drug of gradualism," King emphasized the fierce urgency of now, the need to resist the status quo and take immediate action. King's call to action, first issued over fifty years ago, is relevant for the church in America today. Churches remain racially segregated and are largely ineffective in addressing complex racial challenges. In The Color of Compromise Video Study, Jemar Tisby takes us back to the root of this injustice in the American church, highlighting the cultural and institutional tables we have to flip in order to bring about progress between black and white people.
Tisby provides a unique survey of American Christianity's racial past, revealing the concrete and chilling ways people of faith have worked against racial justice. Understanding our racial history sets the stage for solutions, but until we understand the depth of the malady we won't fully embrace the aggressive treatment it requires. Given the centuries of Christian compromise with bigotry, believers today must be prepared to tear down old structures and build up new ones. This video study provides an in-depth diagnosis for a racially divided American church and suggests ways to foster a more equitable and inclusive environment among God's people.

HOW TO FIGHT RACISM
Jemar Tisby 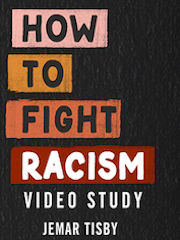 How to Fight Racism Video Study is a how-to-guide for pursuing racial justice. It is long past time to move beyond mere discussions about racism, and equip people with practical tools and suggestions to actually do something about it.

By providing a series of hands-on suggestions for practice bolstered by real-world examples of change, Jemar Tisby offers viewers an array of actionable items to help them become proactive initiators of racial justice. Far more than a simple list of items to do, it also provides a simple framework to help viewers consistently interrogate their own actions and maintain a posture of anti-racist action. This video study is for anyone who believes it is time for the church to stop compromising with racism and courageously confront it.

How to Fight Racism Video Study offers viewers the opportunity to be part of the solution to racial problems in the church and the nation. It equips them to become activists in the cause of racial justice and to see themselves as participants in the struggle for human dignity across racial and ethnic lines. In the end, viewers of the study will have a model for how to think about race in productive ways and to lend their energy in dismantling a social hierarchy that has long been stratified by skin color.