Keywords:
biblical, doctrine, new testament, old testament, revelation, scripture
Join philosopher and theologian Dr. William Lane Craig as he teaches on the doctrine of revelation. There are two main types of revelation - general revelation and special revelation. Both are discussed in detail in this section. Inspiration of Scripture is then discussed with the subject of biblical inerrancy thoroughly explored. Finally, the canonicity of both the Old and New Testament is explained. 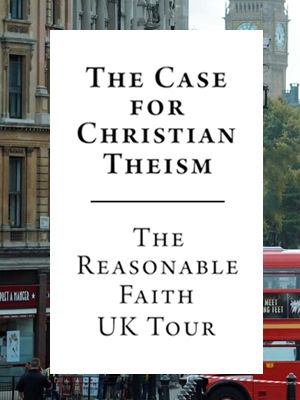 In 2011, Dr. William Lane Craig, the founder and president of Reasonable Faith, participated in a series of lectures and debates from London to Birmingham. This documentary contains never-before-seen interviews with attendees and participants who share their perspective on each event while also focusing on the arguments for the existence of God throughout the tour. The purpose of Reasonable Faith is to provide a reasonable, articulate, yet gracious defense of the Christian faith in the public arena and the Reasonable Faith UK Tour certainly helped to achieve that purpose!
Read more.
APOLOGETICS
William Lane Craig 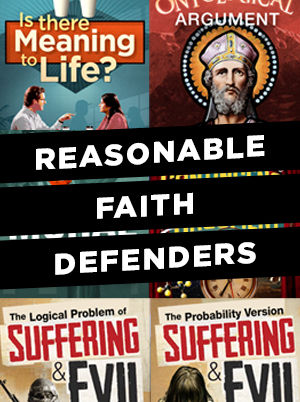 The Meaning of Life
Is there meaning to life? Many atheists have claimed that if God does not exist, then human life is ultimately without meaning, value, or purpose. By contrast, if Christianity is true, then each one of us is here for a reason, and life does not end at the grave. God, who is the absolute standard of goodness, knows you, loves you, and intentionally created you. So your life ultimately does have objective meaning, value, and purpose!
The Kalam Cosmological Argument
Does God exist? Or is the material universe all that is, or ever was, or ever will be? Atheists have typically said the universe is eternal. But a series of remarkable scientific discoveries indicates the universe had an absolute beginning. The question becomes: What caused the universe to come into being? The Cosmological Argument addresses this question and shows that it is quite reasonable to believe God exists.
Leibniz’s Contingency Argument
Have you ever wondered why the universe exists? Indeed, why does anything at all exist? The great German philosopher Gottfried Leibniz argued that there must be a necessarily existent being which explains the existence of everything else. Since the universe doesn’t have to exist, its existence must be grounded in a transcendent, necessary being, which is plausibly identified as God.
The Moral Argument
Can you be good without God? Here’s the problem: If there is no God, what basis remains for objective good or bad, right or wrong? If God does not exist, objective moral values and duties do not exist. But in moral experience we do seem to grasp a realm of objective values and duties. The existence of objective morality thus points us to the existence of God.
The Fine Tuning Argument
Scientists have come to the shocking realization that the fundamental constants and quantities of the universe have been carefully dialed to astonishingly precise, life-permitting values. If any one of these numbers were altered by even a hair's breadth, no physical, interactive life of any kind could exist anywhere. So what is the best explanation for the fine-tuning of the universe? Did we just get really lucky? Does the universe have to be fine-tuned? Or is it fine-tuned because it was designed that way? The Fine Tuning Argument provides answers to these questions!
The Ontological Argument
In 1078, a monk named Anselm astonished the world by arguing that if it is possible that God exists, then it follows logically that God does exist. Anselm defined God as the greatest conceivable being. If it is possible that God exists, then God exists in at least one possible world. But since God is the greatest conceivable being, if he exists in one possible world, then he exists in every possible world, including the actual world. The Ontological Argument thus shows that if God possibly exists, then God actually exists.
Suffering and Evil: The Logical Problem
One of the most powerful objections to the existence of God is the problem of suffering and evil: How can an all-loving and all-powerful God exist if evil and suffering exist? But is it logically inconsistent for God and evil to co-exist? It turns out that the atheist’s argument relies on two hidden assumptions which are not necessarily true. More than that, it can be shown that the co-existence of God and evil is logically consistent. Therefore, it is today widely recognized that the logical version of the problem of evil and suffering fails.
Suffering and Evil: The Probability Version
Does the existence of evil and suffering make the existence of God highly improbable? There are three reasons to think that the answer is, No. First, we are not in a position to make these kinds of probability judgments with any confidence. Second, relative to the full evidence God’s existence is not at all improbable. Third, evil and suffering do not make the existence of the Christian God improbable.
Who Did Jesus Think He Was?
Ever since the Christian movement began, followers of Jesus Christ have said he was God...in human form. But what about Jesus himself? Who did he think he was? With the rise of textural criticism and the modern study of history, historians have developed tools to unlock this question. Today Jesus of Nazareth is no longer just a figure in a stained glass window, but a real person of history, whose life can be investigated historically. So let's examine the New Testament, not as inspired Scripture, but as an ordinary collection of ancient documents. Let's apply to them the standard tests we would use with regard to any other ancient sources. When historians investigate the Jesus of history, what do they find?
Did Jesus Rise From the Dead? Part One: The Facts
If Jesus actually rose from the dead, then his claim to be God’s unique Son carries considerable weight. On the other hand, if the resurrection never actually happened, then Jesus may be safely dismissed as just another interesting, but tragic, historical figure. In this brief animation, PART ONE, we explore 3 main historical facts that need to be explained.
Did Jesus Rise From the Dead? Part Two: The Explanation
How do we explain the 3 main historical facts surrounding Jesus’ resurrection? Down through history various naturalistic explanations have been offered to explain away these facts. In this animation, PART TWO, we examine these explanations as well as the explanation given by the original eyewitnesses.
Read more.
DEFENDERS - DOCTRINE OF GOD: ATTRIBUTES OF GOD
William Lane Craig 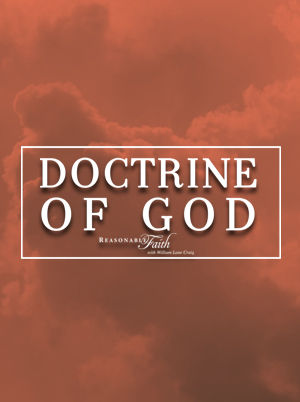 Join philosopher and theologian Dr. William Lane Craig as he teaches on the doctrine of God. God as an infinite and personal being has attributes such as aseity, eternality, omnipresence, omnipotence, omniscience, and holiness. These and other attributes are discussed at length in this section of Defenders.
Read more.
DEFENDERS - DOCTRINE OF THE TRINITY
William Lane Craig 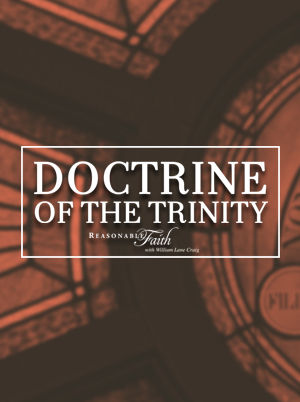 Join philosopher and theologian Dr. William Lane Craig as he teaches on the doctrine of the Trinity. There is one God and there are three distinct persons in the Godhead. The biblical data that supports those two facts that make up the doctrine of the Trinity is analyzed and examined in this section. Dr. Craig goes on to discuss attempts by the early church to explain this doctrine and concludes the section with a possible model of the Trinity.
Read more.
DEFENDERS - EXCURSUS ON NATURAL THEOLOGY
William Lane Craig 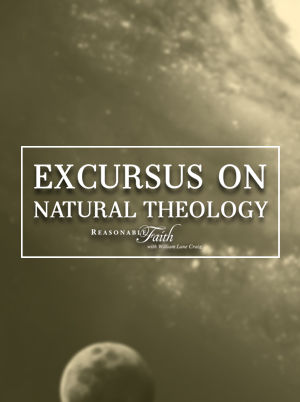 Branching off his Doctrine of God lessons, philosopher and theologian Dr. William Lane Craig, turns to an excursus on natural theology. In an attempt to answer the question "Does God exist?", several arguments for God's existence are explored such as the cosmological argument, the teleological argument, moral argument, and others. Objections to the arguments are discussed as well as answers to those objections. Finally, arguments against God's existence (such as the problem of evil) are also analyzed.
Read more.
DEFENDERS - FOUNDATIONS OF CHRISTIAN DOCTRINE
William Lane Craig 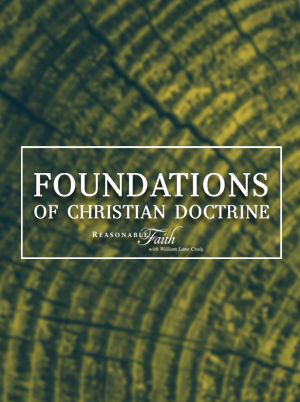 Join philosopher and theologian Dr. William Lane Craig as he teaches on foundations of Christian doctrine. In this section, you'll learn what Defenders is all about! Dr. Craig then discusses what Christian doctrine is and why we should study it. Finally, he discusses the importance of Christian apologetics in the life of the believer and why Christians ought to study it.
Read more.
DOES GOD EXIST?
William Lane Craig 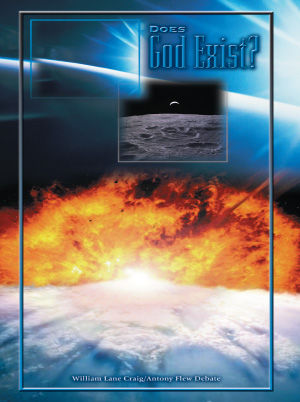 Is there a God? What is the evidence for belief in such a being? What is God like? Or, is God a figment of human inspiration? How do we know that such a being might not exist? Should belief or disbelief in God's existence make a difference in our opinions and moral choices, in the way we see ourselves and relate to those around us? These are fundamental questions, and their answers have shaped individual lives, races, and nations throughout history.

Read more.
WHAT IS THE EVIDENCE FOR/AGAINST THE EXISTENCE OF GOD?
William Lane Craig 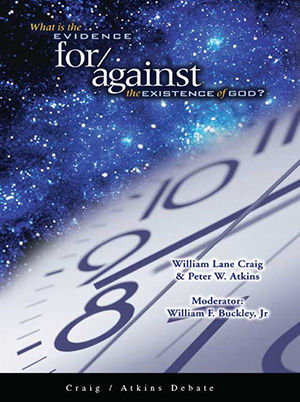 The Faith and Science Lecture Forum in April 1998 hosted a debate between Christian philosopher William Lane Craig and Oxford University's Peter Atkins, a professor of chemistry and an outspoken atheist. The moderator was William F. Buckley.

The debate, "What Is the Evidence for/against the Existence of God," drew an overflow crowd at The Carter Center in Atlanta and was broadcast live to 10,000 people in universities and colleges in the US.

The forum also received much attention in the press here and abroad. Dr. Craig has participated in numerous debates with skeptics and atheists, and in his presentation, he makes a powerful case for the existence of God.
Read more.
featuring has been your queue.