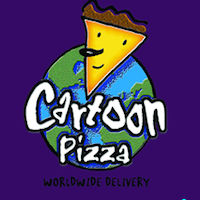 Cartoon Pizza founders, Jim Jinkins and David Campbell have been entertaining children and their families for over 25 years. Prolific and diverse, they have produced films, books, live theatrical events and over 350 episodes of television all with the goal of entertaining, challenging and inspiring children. Their award-winning creative content has been prominently featured by Nickelodeon, ABC, Sony Wonder, Random House, The Walt Disney Company, Sesame Workshop and many many other major broadcasters and distributors around the world. Highlights from the career of this creative team include DOUG, PB&J OTTER, 101 DALMATIONS, STANLEY, JOJO'S CIRCUS, GLOBAL THINGY, THE BEGINNERS BIBLE, RICHARD SCARRY SERIES, ALLEGRA'S WINDOW, and the soon to be seen PINKY DINKY DOO. Along with their production head, Jack Spillum, Campbell and Jinkins are proud to have been at the forefront of the resurgence of series animation in New York City in the 1990’s. Actively developing and producing programs in multiple forms of media, Cartoon Pizza continues to be dedicated to finding new ways to bring funny, hopeful programming full of meaning to kids and family.