A deadly red tide concocted by Professor Pinch and the evil squid Krakken threatens the reef village where the Finley family lives. When King Pacificus intervenes and offers an unlikely shelter of protection, he teaches the reef fish about trust and forgiveness.

OTHER SERIES IN Kingdom Under the Sea - Español

KINGDOM UNDER THE SEA: THE GIFT - SPANISH 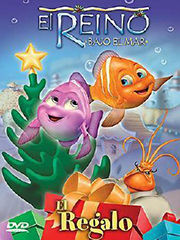 Beneath the waves lies a wondrous and enchanting world of colorful coral reefs and spectacular sunken ships, a kingdom under the sea.

It's Christmastime in the kingdom, and the town has been transformed into a holiday wonderland. However, somewhere between the lights, presents, and decorations, everyone in the kingdom has forgotten the true meaning of Christmas, until the town's archenemies, Professor Pinch and his not-so-bright sidekick, Clawed, try to destroy it.

A magical mix of adventure, discovery, and comedy, The Gift is about the journey to rediscover the meaning of Christmas. Come unwrap the truth!

Read more.
KINGDOM UNDER THE SEA: RETURN OF THE KING - SPANISH 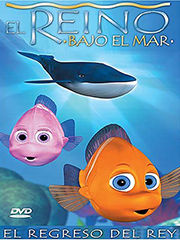 Splash and his sister Coral have long awaited the return of the great whale king. Splash lets a secret slip that gives the evil Krakken an advantage. Then, the great whale king sacrifices himself in order to save his school of fish, but later returns when the breath of life is given to him.

Join Splash and Coral as they swim through this wonderful wave of adventure that is sure to entertain your entire family.