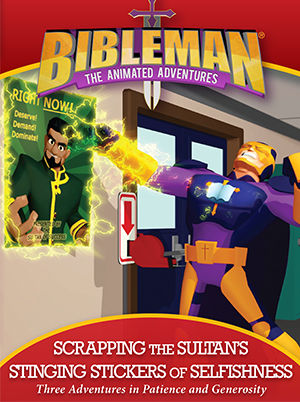 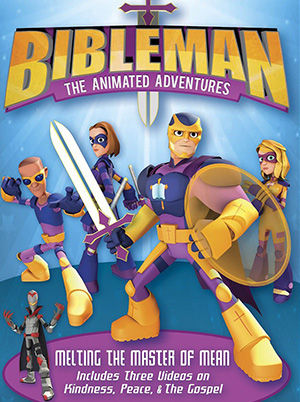 Melting The Masters Of Mean (An Adventure in Kindness)
Jimmy and his older brother witness the Biblevan getting in to a traffic accident. But wait - was it really an accident? Uh-oh, the Master of Mean is on a rampage to destroy Bibleman and his entire team, and this villain doesn't care who he hurts or what he breaks in the process. Based on the Bible story Mephibosheth, this adventure offers a lesson in kindness.
The Mayor Of Maybe Doles Out Doubt (An Adventure with the Gospel)
Bibleman answers a distress call from a pastor on a Caribbean island. A stranger is handing out free "Bubba Gum" to all the kids, and it's causing them to severely doubt their faith! Good thing Bibleman isn't ashamed of the gospel: he knows it is God's power for salvation to all who believe. Based on Peter's Pentecost sermon, this adventures offers a lesson in the Gospel.
Dr. Fear's Almost Perfectly Disastrous Day (An Adventure in Peace)
Nobody wants to be a patient of Dr. Fear, but that doesn't stop him from planting stop him from planting seeds of fear all over Whispering Pines Christian Camp. Will Bibleteam figure out why all the campers - and even the counselors - are paralyzed with fear in time to foil the Doctor's nasty plot? Based on the Bible story of Jesus calming the waves, this adventure offers a lesson in peace.
To learn more about Bibleman please visit www.Bibleman.com
Read more.
BIBLEMAN: CLOBBERING THE CRUSHER 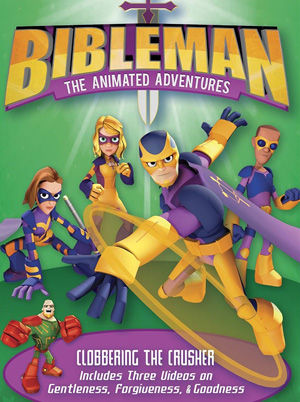 Clobbering The Crusher (An Adventure in Gentleness)
Even his evil henchmen are afraid of the Crusher. But this most violent villain is also wickedly clever, luring Bibleman and Cypher into a deadly trap and using schoolkids as bait. Can Bibleman rescue the kids before Crusher destroys them all? Based on the Bible story of Rehoboam, this adventure offers a lesson in gentleness.
Braving The Big Battle With The Baroness (An Adventure in Forgiveness)
Nobody expects an English tutor named Baroness Fitzhugh-Ferguson to win a congeniality award. But her influence on the Woodson kids is awful: does she want to turn them against each other? Bibleman knows she's a villain, but can he stop her before the family is ruined? Based on the Bible story of Jacob and Esau, this adventure offers a lesson in forgiveness.
Repelling The Ronin Of Wrong (An Adventure in Goodness)
Talk about a knock-down-drag-out battle! Bibleman is in a fight for his life - trapped in an underground tunnel with a ruthless, twin-sword-wielding villain. Yes, our man in purple chased the bad guy away from the community center opening ceremony, but should he have followed Ronin down here? Based on the Bible story of the Good Samaritan, this adventure offers a lesson in goodness. 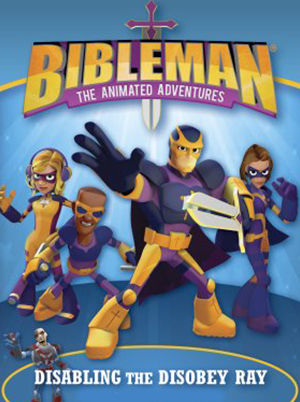 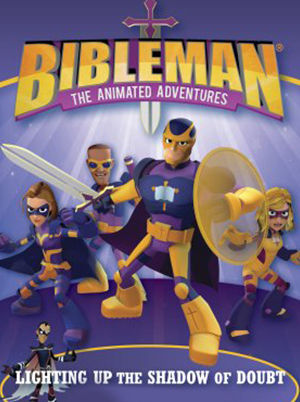